On Friday, August 29th, Japanese Prime Minister Shinzo Abe announced that he was retiring due to poor health. In an ordinary year, this would have been significant international headlines; however, amid a global pandemic with seemingly important news coming out almost every other day, this headline was just one more in the never-ending stream. That said, this shouldn't diminish its significance. After all, Japan is the third-largest by GDP and has the third-largest stock market exchange by companies' market size. At the moment, Japanese stocks make up over 26% of the MSCI EAFE index (developed international countries excluding Canada and the U.S.). Because of that, I wanted to specifically dive deeper into where things currently stand with Japan and how investors are approaching the country for this month’s “thought’s” piece.

Abe is perhaps well known globally for his economic policy, nicknamed "Abenomics," comprised of three "arrows": 1, Aggressive monetary policy easing to end deflation and boost nominal growth, 2, Assertive use of fiscal policy to complement monetary policy and jolt the economy onto a higher growth path, and 3., structural reforms to raise Japan's long term potential growth. If this sounds familiar, it's because global leaders are equipping the first two arrows in their fight to revive economies post the COVID-19 pandemic.

The initial market reaction to this news has been a neutral one. The new prime minister Yoshihide Suga has been Abe's right-hand man, and all indications are that he will look to stick with Abe's policies and build off of them. The Bank of Japan (BoJ) will remain accommodative, and it doesn't appear that current governor Haruhiko Kuroda will leave before the end of his term in 2023.

That said, there are challenges that Suga will face. While Japan is managing the pandemic better than other developed nations, it's citizens are unhappy with the government, and Abe's approval rating before his resignation was his lowest in years. When Abe took over in 2012, the country was in crisis, reeling from the Fukushima nuclear disaster and was in a "bog of deflation." Now, the government is in a similar situation, with Japan reeling from the COVID-19 pandemic and mired in a recession.

To get them going again, Suga will continue to rely on Abenomics. Abe wasn't entirely successful in structural reforms; that said, the Japanese labor force has expanded much faster than population growth would imply due to labor force participation by women and seniors. This has benefited Japan's potential economic output, which economists think has room to run. Suga has come out and said that he has four initial policy goals: a new agency for digital policy (looking to improve the digital footprint in Japan), cuts to mobile phone charges (by as much as 40%, which will help with his digital policy goal), coverage of fertility treatment on public health insurance as a way to increase the birth rate, and a shake-up of Japan's bureaucracy (by consolidating regional banks). He will, however, be running against powerful vested interests. For example, a move to allow telemedicine past the COVID-19 pandemic (one of his digital policy goals) would upset Japan's doctors who have regional dominance.

There will be some political challenges that Suga will have to navigate, primarily holding off his party's younger, ambitious members. This past weekend, Suga said that he would not look to hold an immediate election to get a mandate but instead focus on governance until Abe's term would have expired in September 2021.

From a capital markets perspective, investors will be keen to look to see how things unfold in Japan. Following Abe's election in 2012, investors poured money in. However, since 2015, global investors have reversed that trend and have continually pulled money out, citing poor structural economic conditions. Despite that, in the last five years, Japan has outperformed European stocks by close to 12%. 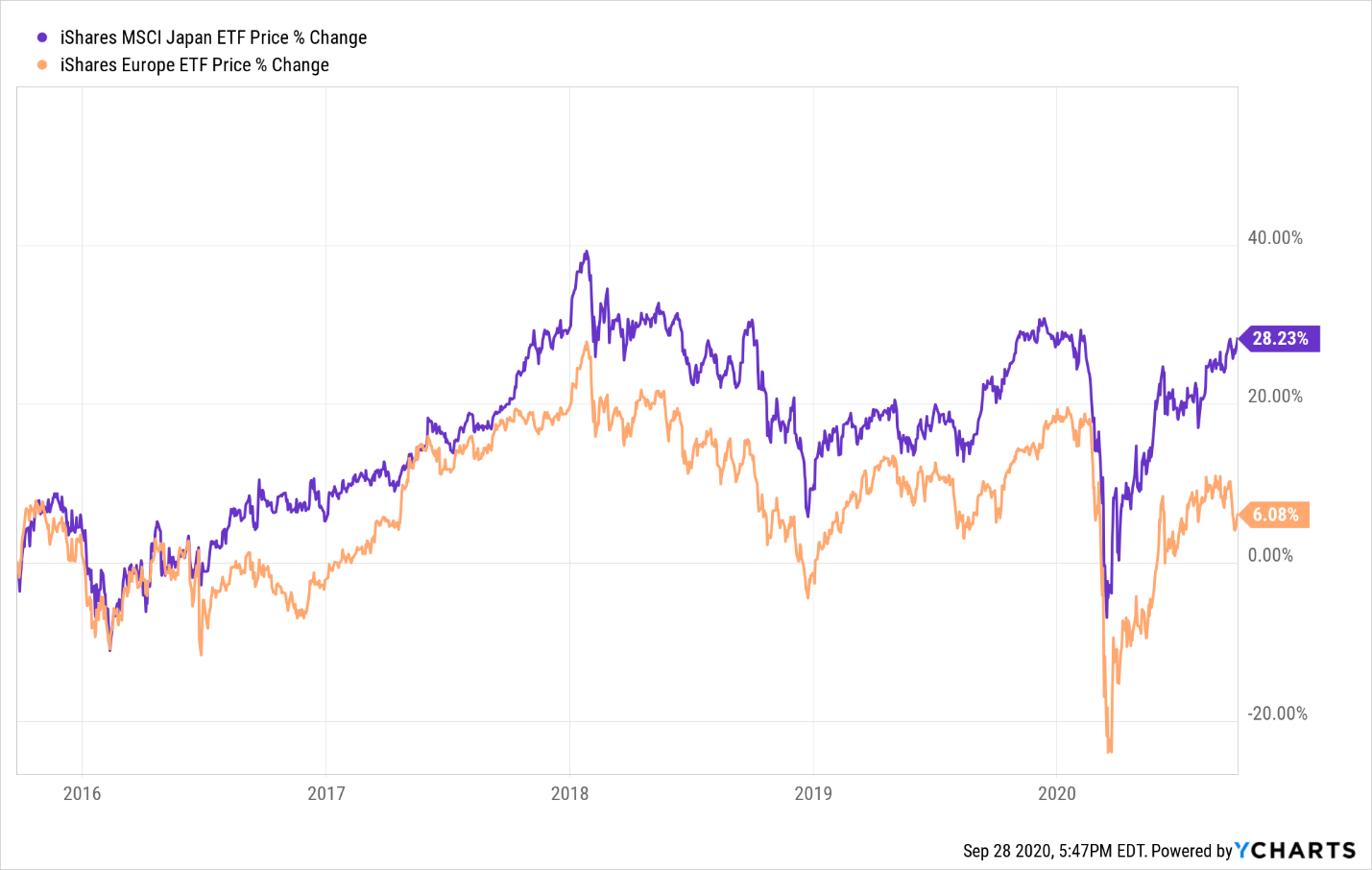 Japanese companies have earnings growth but are not given any market premium. In 2004, Japanese stocks traded on par with some of the most extreme U.S. tech valuations; since then, U.S. equities are up 3.5 times more than Japan's. The biggest detractor is that Japan simply doesn't have a large IT sector like the U.S. that can singlehandedly drive the market. It is an export-oriented country whose index is led by industrial and consumer discretionary stocks.

Looking ahead, this market can be an interesting one for investors. In a low-interest-rate environment, where stocks are preferable to bonds, Japanese equities could perform well. Corporate debt is low, and once the global market begins to recover, Japanese companies will likely begin to pay out more to shareholders.

Investors remain "neutral" on Japanese equities, but there are certainly opportunities to be taken advantage of. If Prime Minister Suga can push forward with his plan and help improve the future economic structure, investors will likely look to invest in Japan once more.