The upcoming U.S. Presidential Election has been on the minds of the majority of Americans and investors alike. Investors like to look ahead and predict what the election will look like and subsequently make investment decisions based on what they feel the new or continuing administration policies will be. Before we take a look at what is on investors' minds and which asset classes could perform well post Election Day, I want to point out that as long-term investors, we aren't basing any decisions based on who is elected. As you can see below, history has shown that the party in power is not a significant differentiator of investment returns: there are too many other factors, variables, and events that impact markets and assets over time. 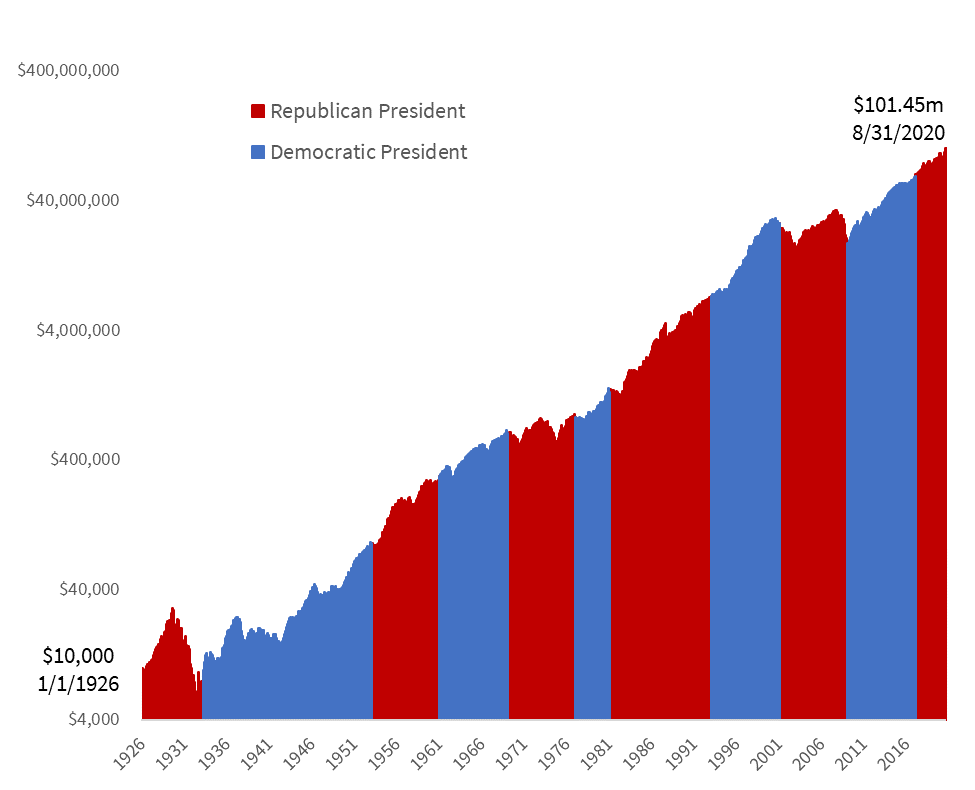 If we were to dive a little deeper into this, looking at data from 1933-2019 (excluding 2001 due to Sen. Jeffers changing parties midyear), a split Congress with a Democratic president has been the most beneficial to the S&P 500, resulting in an average annual return of 13.6%. However, this has only occurred four years of the 86, so a relatively small sample size. The common phrase I hear a lot is that "markets love a split government," and the data seems to back that up – in the 12 years we have had a split congress, the S&P 500 saw an annual return of 10.38%. The most common occurrence has been a unified government with a Democratic president (34 years), which resulted in an annualized return of 9.34%. For comparison, a unified government with a Republican president (8 years) saw the S&P 500 have an annualized return of 12.95%. The annual return of the S&P 500 over the entire 86 year period is 9.11%.

As I wrote in the introduction, it's nearly impossible to extrapolate any forward-looking conclusions from this data as there are so many other variables in play that dictate asset pricing. Nonetheless, I find it interesting to look at it.

The one area that always does appear around elections is increased volatility. This chart from Natixis, taking a slightly longer time range than the data referenced above, highlights that.

On cue, the markets have already priced in volatility (as measured by the VIX). Historically, markets tend to bottom in advance of the election and then grind higher towards year-end. This occurrence may be very well due to clarity around the new administration and investors adjusting their portfolios accordingly.

This year, on the other hand, the VIX remains elevated for the months after the election:

Given the events for 2020, this isn't out of the ordinary. While this volatility could be virus-related, it's more likely due to the wide partisan rift and concerns around a contested election. But, markets have seen a contested election before – in 2000. Between Election Day on Nov. 7th and the Supreme Court Decision on Dec. 12th, the Russell 2000 lost 6.97% while the S&P 500 was down 4.87%. Risk-off assets were positive, with U.S. Treasuries up 3.52% and Gold up 1.54%. We can see in the chart below that after the Supreme Court Decision, equities inevitably rallied. 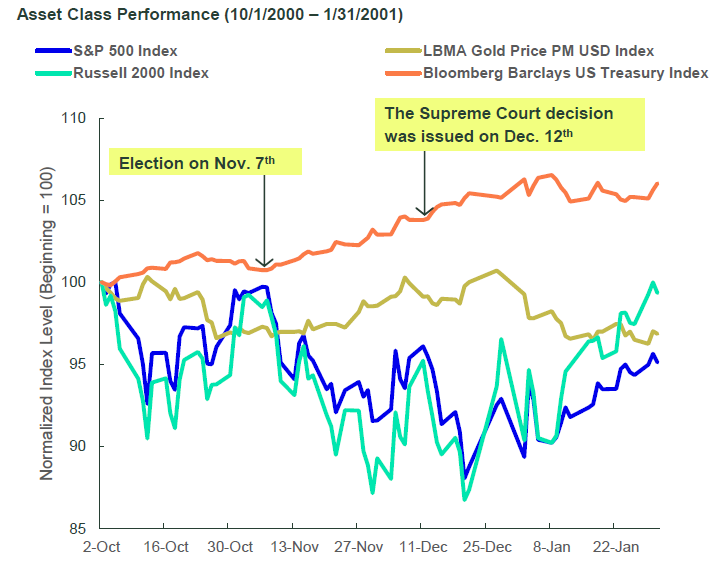 With that historical backdrop, here is what the market is thinking concerning different outcomes.

President Trump being re-elected would be a positive for U.S. equity markets and related U.S. risk assets. The current administration is business-friendly, and their rolling back of regulations has contributed to stock price appreciation. On the equity side, a pro-growth agenda would remain unchanged and, once we begin to return to a normal post-COVID-19 world, value and cyclical sectors would be set to perform well. It's expected that we'll continue to have a low-interest-rate environment, so Investment Grade, Emerging Market, and High Yield bonds would be in favor. The current energy policy would be maintained, which favors oil and gas companies and bonds in the high yield space, as energy is a big sector within junk bonds. We could see further deterioration of the U.S./China relationship, which could slow down global trade and drag down Emerging Markets Equities. However, given other fundamental reasonings, we're still bullish on the asset class moving forward.

If we see a Democratic sweep, there will be some concerns around financials, energy, and some small-cap names as the new administration will focus on more regulation and corporate tax reform. We'll continue to have a low-interest-rate environment, but municipal bonds would be more favored if we see any tax reform. Green energy names would also garner a lot of investor interest). From doing a deeper dive into Vice President's Biden proposed economic policies, investors and economics alike think that they will be a net boost for the U.S. economy, both in the short and possibly in the long term. Any sort of negative consequences from raising taxes would be outweighed by planned spending, both in terms of COVID-19 relief, green energy/infrastructure, and R&D in the tech space. Investors believe that there will still be policy changes regarding China, but this outcome should be more friendly to emerging markets on the margin. A higher degree of policy predictability and a less unorthodox approach provides investors confidence and helps support returns. Trade with Europe should improve, which should help global trade, which will help E.M. countries. A significant infrastructure bill should benefit commodity prices, which, once again, will benefit the E.M. sector.

At the moment, the market is pricing in a Democratic sweep. Investors anticipate massive future stimulus if the Democrats control both branches. Future stimulus, both fiscal and monetary, combined with a new vaccine and low-interest rates, could accelerate the economic recovery in 2021.

However, this is far from a guarantee. If the Republican Party retains control of the Senate, we may see further stalemates in D.C. And while historically a split Congress has favored the capital markets, it may not in this case. If passed, a stimulus deal may not be as big as the market is hoping for.

All of that said, from the viewpoint of a long-term investor, pre-election volatility is simply more market noise. Instead, we should focus more on longer trends and what we could do about it. Next month, I'll take a deeper dive into the fixed income world and what low-interest rates mean for expected returns moving forward, and how we're thinking about it as a team. Until then, please do not hesitate to reach out with any comments or questions.