While everyone, including investors, closely watched the U.S. Presidential Election, it was ultimately the announcement of a successful vaccine trial by Pfizer that proved to be material enough to move the capital markets. When incorporating Moderna's positive news about their successful drug trial, investors have become more optimistic about 2021 and onward. Rightfully so, there is now light at the end of the tunnel. However, before we get closer to that light, there will be bouts of market volatility generated by the virus's resurgence. From listening to medical professionals and health care analysts who have been keeping a close eye on the pandemic throughout 2020, there is a growing belief that the next 12 weeks could be even worse than what we saw in March. As we head into year-end, it's essential to look ahead at the equity markets' longer-term prospects while understanding the problematic current economic conditions and how they may impact the capital markets in the short term.

One of the most important reminders that we've been saying in our meetings and writings this year is that "the equity markets do not equal the economy." However, historically, there has been a positive correlation between GDP growth and S&P 500 performance. After all, over the long term, GDP growth is a proxy for equity growth (this is a very simplified explanation and a general rule of thumb taught in economics). This chart, courtesy of Blackstone, highlights that in 2020, this has not been the trend. 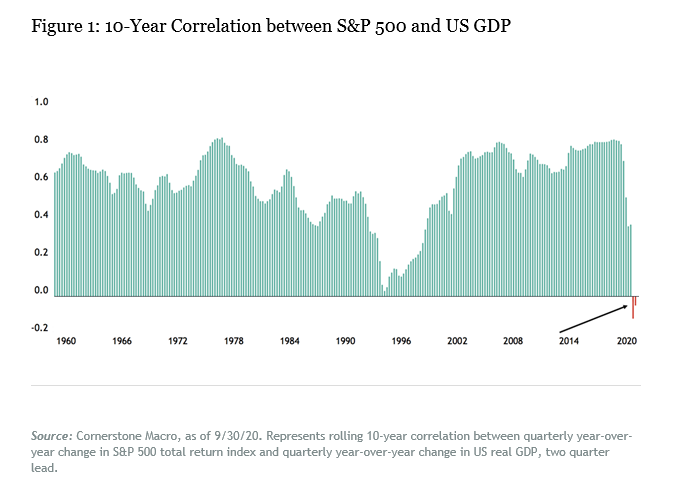 However, 2020 has not been a typical year, and this has not been a normal economic recession. Many investment strategists look at it as a large scale natural disaster and believe that the economy will rebound fairly rapidly once we get a vaccine widely distributed (instead of a more gradual economic recovery after a "normal" recession). At the moment, there is a lot of pent-up demand by U.S. consumers. Once things are opening up at a large scale again, and things are as close to the pre-COVID world as possible, there will be ample demand for concert tickets, sporting events, overseas travel, hotels, cruises, etc. Companies in those areas that have been sold off, typically in the "Value" sector, are primed to recover. In fact, on the positive news of the vaccine, investors have already begun to rotate out of growth and into value – just look at the trailing one-month returns for the S&P 500 value vs. growth. 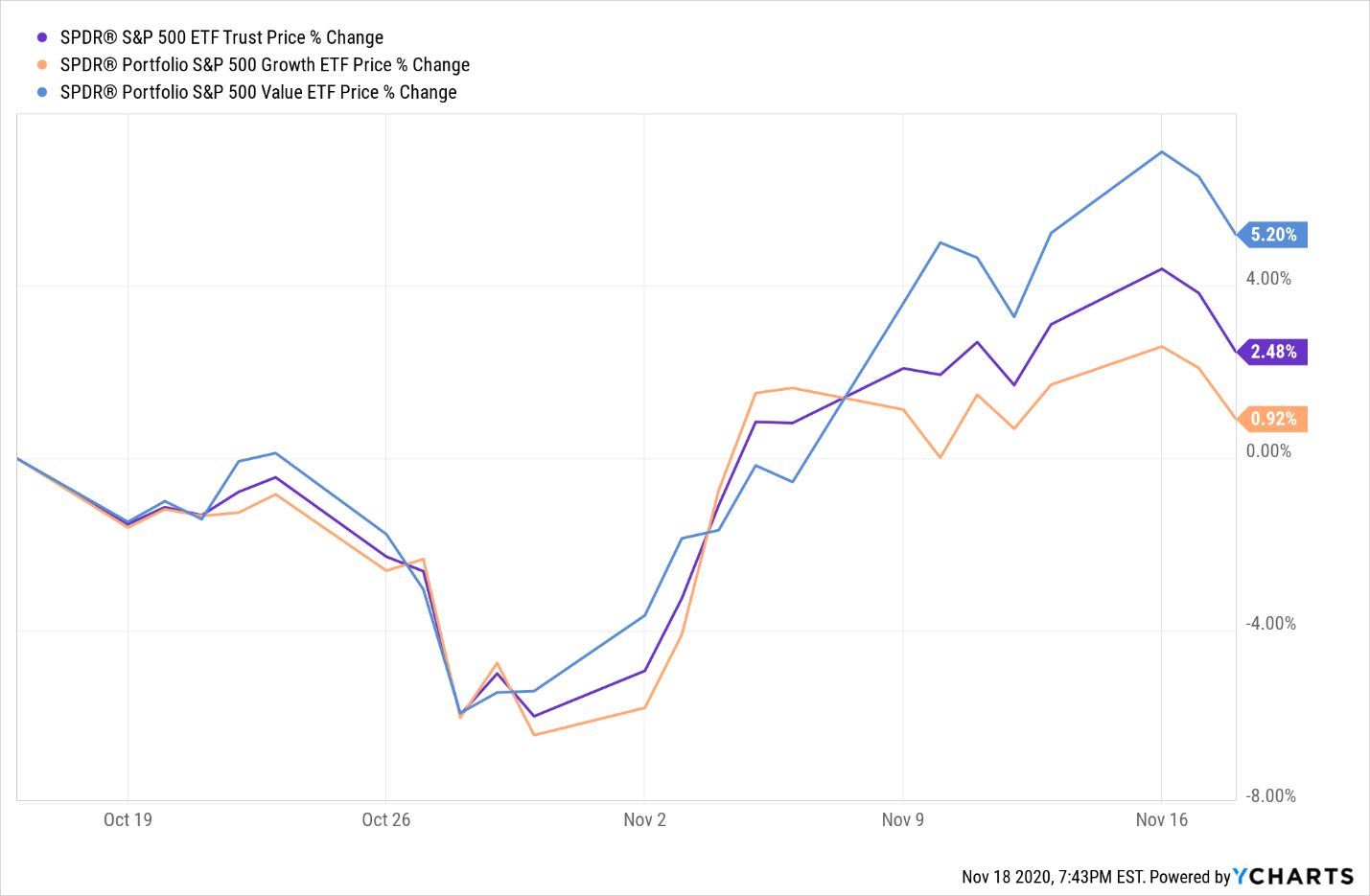 Per Goldman Sachs, FAAMG stocks have accounted for 8% of the 12% S&P 500 return (as of early Nov). That means that, on average, the remaining constituents of the S&P 500 have vastly underperformed the index and, as things normalize, are set to drive the index even higher. However, this doesn't mean that growth trade is going away in 2021 – historically, there have numerous "value rallies" in the past that have rarely lasted more than a few months. The real big question is – will the companies that sold-off this year be in a position to really compete and grow in the new environment? Time will tell, but investors will reward companies that produce growth, especially given that we are in a low-interest-rate environment.

The combination of positive vaccine news and investors' appetite for growth means that business leaders have started to build out business plans for a post-COVID world. Per the Financial Times, on Monday alone, companies across the globe announced almost $40b worth of M&A deals. This funding has come from cheap debt sources, or cash held on throughout the pandemic. Those companies that have been able to survive are now positioning themselves for (hopefully) future success. On the flip side, numerous small businesses are closing down for good, and many large-scale ones are going through bankruptcy. While this doesn't have an immediate effect on the broader capital markets, this does flow through to the economy in the form of lost jobs and income.

The simplest way to think about the U.S. economy is that one's spending is another's income. We are predominantly a service-oriented economy and a consumer-driven economy. When evaluating economic conditions, one of the simplest ways to imagine this is to break down consumers into "Savers" and "Spenders." If one has a stable job with a steady income and is confident in maintaining that job for the foreseeable future, they tend to be "spenders." If one, however, has an opposing view, where they are not sure what their income will be in the future, or if they even will have an income, they will be "savers" as they are looking to build their rainy day fund to use when they don't have a job. The more people that fall into this new "savers" category, the worse it will be for any economic recovery. This, combined with the potential for any new lock-downs, is one big worry for investors regarding the economic recovery. Right now, it appears that Europe is heading for a second recession, and economists and investors alike will continue to scrutinize economic data coming out of the U.S. to see if America will follow suit. The expectation right now is that we will not.

Taking a look at high frequency economic data from JP Morgan, it appears that we are starting to trend downwards: 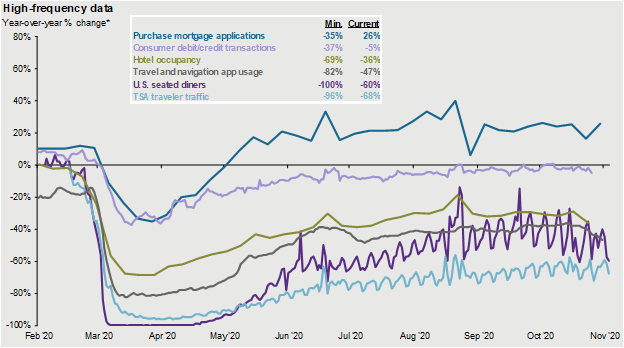 This most recent downturn is a negative sign and could worsen as we head into the holiday season when many people are traveling, eating out, and in general, are spending money. When looking at the most recent "Reopening" chart from Goldman Sachs, a similar downward trend can be found 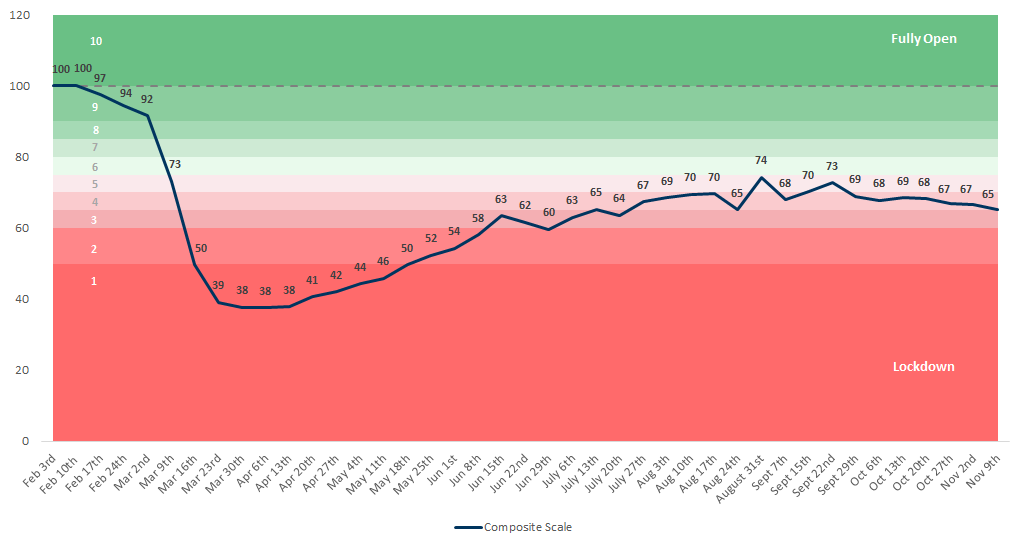 Last week's "score" came in at 65, continuing a downward trend seen since Labor Day weekend. The positive news is that at a score in the mid 60's, the economy is operating at levels seen in June when things began to bounce back. That said, acceleration in COVID-19 cases is driving a reversion in consumer behavior back to levels seen earlier in the pandemic. Cities and states are re-instating COVID-19 related mandates, and people are changing their behavior due to the worsening of the pandemic. The markets expected this slowdown; however, as always, the question is, "will the slowdown be better or worse than expected?"

While this recent outbreak and somewhat gloomy look into the winter is cause for concern, both economists and investors agree that, once again, we will get past this, and our economy will be resilient and continue to recover. Looking at Purchase Manufacturer's Index (PMI) data, the product aspect of the global economy bounced back quicker than expected (chart courtesy of Nuveen). 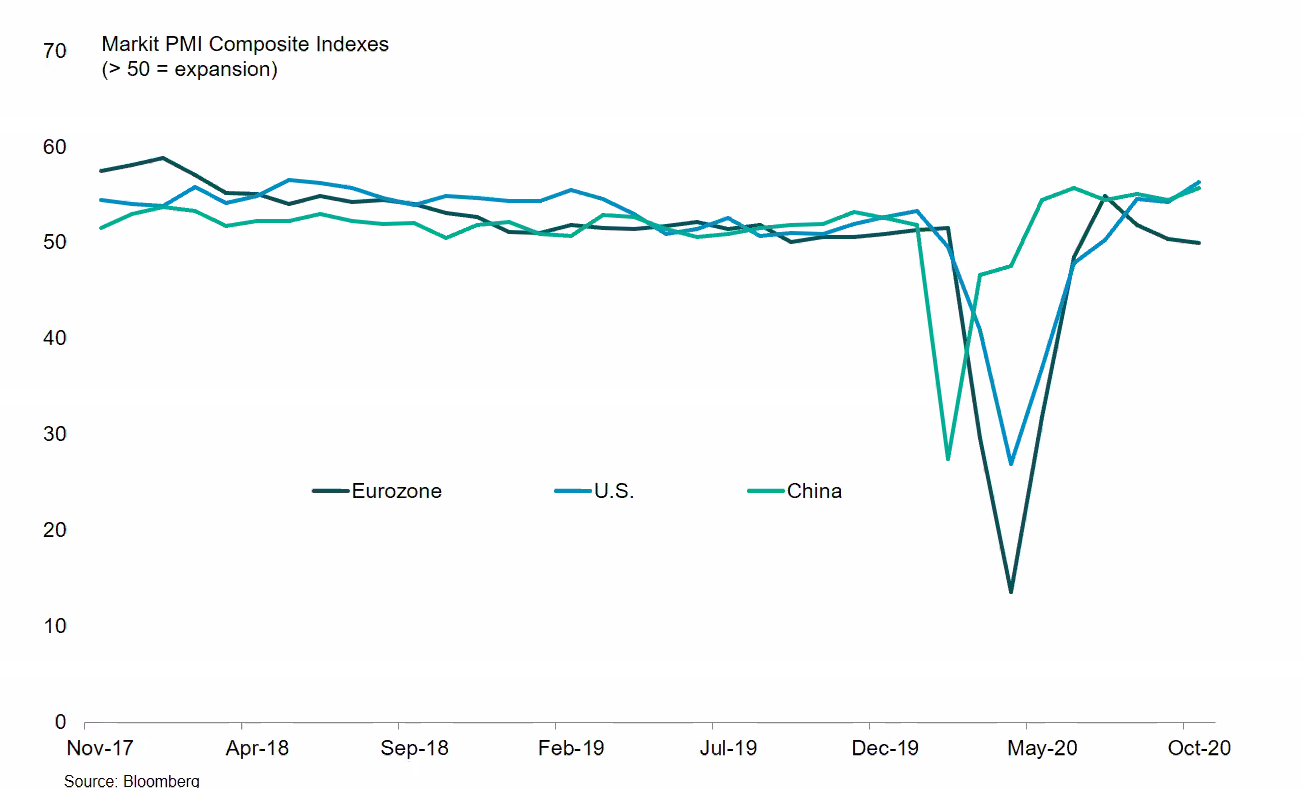 The big question, once again, is whether this recovery can be sustained throughout the winter.

One of the biggest surprises that didn't get many headlines in October and November was the strength of corporate earnings. Per DWS, "Bottom-up 3Q S&P earnings per share (EPS) is $38.81, $6 above the consensus of $32.85 at September end. Of this $6 surprise, $3.50 is from Tech, Communications, Consumer Discretionary and Health Care, $1.50 from Financials, and $1 from the other six sectors." This earnings strength level led DWS to raise its outlook for the S&P 500 in 2021, following other asset management firms' lead.

It's important to note that throughout 2020 there have been many unknowns which, at times, weighed down stocks – especially during the sell-off in March. Since then, investors have slowly identified the risks and moved past other ones. While there could always be another black swan event, right now, the market's equity risk premium is low. There is an expectation that we'll get at least one vaccine approved by the FDA and administered to a large U.S. population. The capital market expects a divided U.S. government, which means no significant regulatory changes, especially when it comes to taxes. We'll have more clarity on policy, and the Federal Reserve should continue to be supportive and keep rates low. All of this is positive for equity markets. And, as I alluded to earlier, there is a lot of pent up demand. As one strategist told me this week, "if we could snap our fingers and rid the world of COVID-19 tomorrow, the economy (and subsequently the stock market) would go on an absolute tear." While, unfortunately, there is a long way to get to that point, we are inching ever so closely. Any good or better than expected news we get along the way will be a positive for the capital markets. Anything worse than expected will be a negative.

It will be a long winter ahead, and we very well could see a lot of volatility, but there are good things to come for long term investors.