While we have written a lot of updates about what we’re seeing in the U.S. markets, we thought it would be important to provide our thoughts on what is going on in the rest of the world. This week alone saw two major market drivers – the announcement of a record €750b rescue fund by the European Union and further deteriorations in the US-China relationship with each party closing down a consulate in each other’s country.

These developments are notable because of the belief by many investors that Europe and Emerging Markets (led by China) could be set to outperform the US market both in the short and long term. In fact, since May 1st, both EM and Europe have outperformed US Equities (represented by the Russell 3000 index): 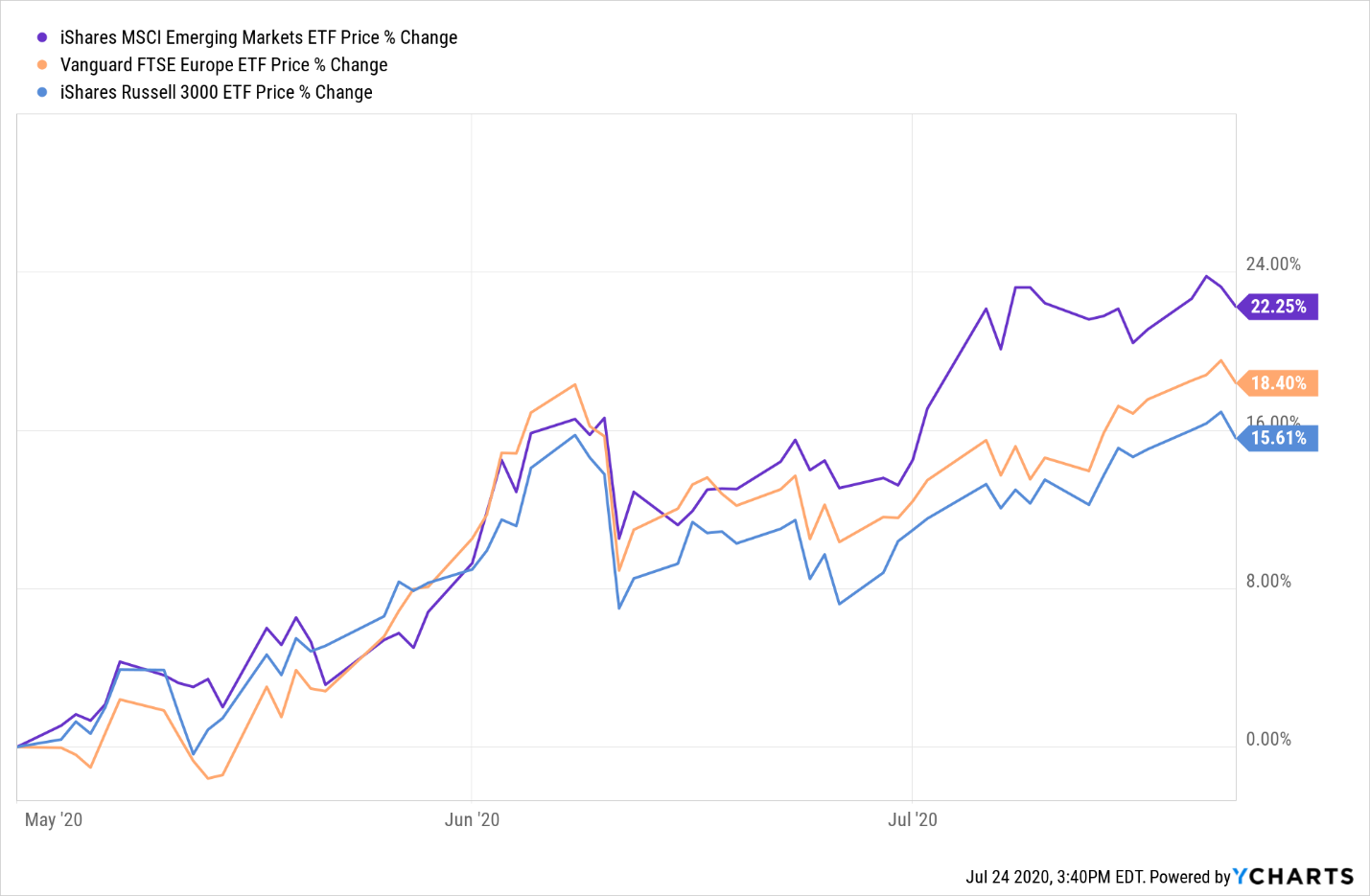 This recent favoring of European and Northern Asian assets is primarily due to those regions’ ability to control virus spread, their ability to leverage changing global trends, and the sustainability of their policy support.

The united European Union stimulus announced on July 21st was a big boost for markets. The €750 billion rescue fund will provide a combination of grants and loans to countries in need, particularly Italy & Spain who are set to receive around 20% of the funds. The package is divided into €390b grants and €360b of low-interest rate loans. The hope is that countries could use this as an initial spark for some far-reaching reforms that could ultimately increase economic production. This could also further push for a united fiscal and debt union, which would appease some heads of states and global investors.

To finance the debt, the European Union as a whole is taking on the obligation. This is exactly what Alexander Hamilton proposed as Treasury Secretary after the Revolutionary War. A continuation of “mutualization” of debt, where member states pool their borrowing power, is not off the table and would be a big boost for some of the “lagging” European countries (i.e. the southern ones) to access capital markets moving forward. For investors, it is a very encouraging sign to see broad cooperation like this – it is something that was highly unlikely heading into the year. Should such cooperation continue, the E.U. could very well have the same firepower and be able to help its economy as the Federal Reserve did in the United States.

In their analysis, Goldman Sachs writes that "given effective virus control, a strong rebound in the data and a favorable macro policy backdrop, we expect a steeper and smoother rebound in the Euro area than elsewhere, including the United States." One of the stronger data points has been the Purchase Manager Indices (PMI) data. For the month of June, Spain, and France were in expansionary territory and its very likely Germany catches up to them in July. While not reaching the expansionary territory, other European countries rebounded dramatically when looking at it from a month over month perspective. Business confidence is also on the rise – this will ultimately lead to the demand for goods and will further grow the European economy. This quick recovery has led to the appreciation of the Euro vs. the dollar, which will provide a tailwind for U.S.-based investors in Europe.

European companies stand to benefit from a faster re-opening of not only their economy but the Chinese economy as well. Many companies export to China and any trade war ramifications between the U.S. and China will only help them.

The risk in Europe, is that due to the cyclical nature of their businesses, any surprise rise in cases will trigger an equity sell-off. They will also be vulnerable to negative earnings surprises. On a medium to long term basis, many of the pre-COVID risks remain in place. Structural deficiencies, such as high taxes & entitlements, low labor mobility, high unemployment among the young, rapidly changing demographics, and populist uprisings, will be a drag on economic and earnings growth potential for the foreseeable future. On the flip side, the recovery package could very well be the beginning of correcting some, if not all, of those deficiencies.

The rally in emerging markets has been led by China and countries that have close economic ties to China. At the moment, China makes up 40.9% of the market cap-weighted EM index, with Taiwan coming in second at 12.25%. The dramatic rebound in Chinese Q2 GDP numbers confirmed a V-shaped recovery. Economic growth has turned positive year over year, which is unlikely to happen for at least another year in other major economies. As a result, the expectation is that Chinese leadership will focus on targeted measures instead of broad-based policy support.

Per Mathews Asia, the quality of earnings coming out of Chinese companies is also improving. Some of the tech-related trends that we are seeing domestically have already occurred pre-COVID in China, which has further aided their recovery. Like the U.S., however, the stronger, larger, more dominant businesses are in a better position to survive. They could continue to expand, acquire businesses, and become even more dominant. This, combined with a bullish editorial in a state-run publication, has pushed investor confidence upwards. Year to date, Chinese investors have taken on their highest level of margin since 2015 (albeit not nearly to the same extent).

Despite the positive news coming out of China, there are still lingering effects of the virus (shown in their economic data). If there is a further slowdown of the global economy, Chinese exporters will be hurt. The IMF recently downgraded global growth outlook from -3.0 to -4.9% as economic damage has been worse than initially thought. This estimate could have further downward revisions as new cases pop up and further lock-downs are initiated.

As we have seen this week, the conflict between China and the US will drive markets down. However, this could be a long term positive for EM investors as it will provide great investment opportunities as China will need to look for new trade partners. Because of the global fiscal stimulus acting as a de-facto “insurance policy,” investors with a risk-appetite have added to EM this year. Stocks and bonds have seen $20b in inflows through May, re-tracing March’s decline.

As of now, we are still positive in our viewpoint of the international markets. However, we do want to be mindful of the way we access those asset classes. We are in continuous conversation internally and with our portfolio managers on the actions they are taking, and the opportunities that we are seeing. Given where valuations are and the economic conditions, it is very likely that this period could be the catalyst for international equities to outperform U.S. equities.